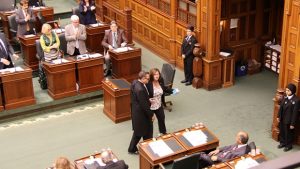 New Democrat Monique Taylor was ejected from the Ontario legislature today when she refused to stop railing at the government over cuts to Intensive Behavioural Intervention (IBI) therapy for autistic children.

Taylor, a Hamilton Mountain MPP, ignored the Speaker’s order to sit and kept yelling at Premier Kathleen Wynne and the Liberals for cutting children over the age of five off the waiting list for IBI therapy.

Wynne says the government wants to get kids off the waiting list by providing a less intensive type of therapy, but parents who oppose the changes are staging a protest outside the legislature on Thursday.

In April, the Liberal government announced a new Ontario Autism Program with $333 million in funding, but changes include limiting IBI to children between two and four. Families with kids five and older on the IBI wait list will get $8,000 to pay for treatment as they are cut off the wait list.

“What this new program will do is take children off that wait list immediately,” she told reporters. “They’ll transition to a new, enhanced ABA program that will be longer in duration, will be as intense as it needs to be based on clinical assessments.

“We need to move away from these IBI/ABA distinctions and make sure we’re getting the right treatment for children at the right time,” MacCharles said.

Taylor is the NDP’s Children and Youth Services critic.