Local families took part in a rally today outside Kitchener City Hall against the Ontario government’s plan to cut funding for  intensive behavioural intervention therapy or IBI, a type of therapy for children with autism.

It was one of a number of rallies that took place across the province. The Liberal government recently announced children with autism over the age of 5 will be removed from a waiting list as of May 1st and instead receive a one time payment of $8,000 to help cover therapy costs. The children will also get access to applied behaviour analysis, which is considered a less intensive form of therapy.

Niveen Shrem wore a blue hijab to the rally, because blue is the official colour of autism. She enrolled her son into private therapy since he was put on a waiting list almost two years ago. He’ll be five in July and won’t see the benefit of the government assistance.

“He’s still non-verbal but when he does the therapy he actually communicates with the therapist and he talks a little bit more,” she told CBC News. “But we’re only doing six hours a week. He’s supposed to be getting 21 hours a week.” 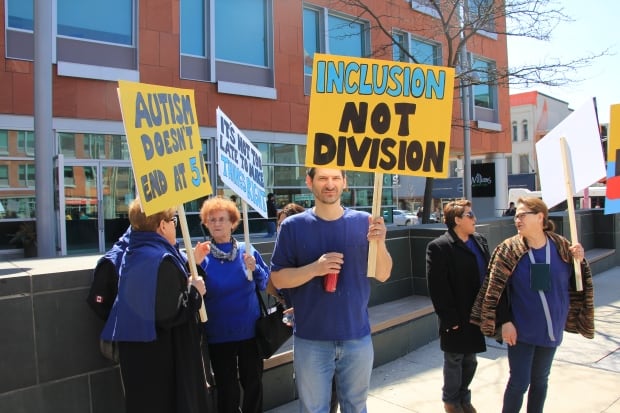 Chris Hall and his wife Lorraine express the same sentiment as Niveen. The Halls’s son Ryan has been receiving IBI services at home since April of 2015.

“You see a non-verbal kid who goes from not being able to talk to telling his parents that he’s got something to say, that he loves them. I don’t care what anyone says, that’s huge,” said Hall.

While the Halls know the service is ending, they say they have not been given an exact date nor have they been given a transition plan.  Hall admits he cheered when he first heard about the government’s plan for $333 million for autism funding and the wait list reduction it would have. But that sentiment quickly changed, he said.

“In spirit we agree that waiting lists should be reduced and kids should absolutely get help sooner. I think as parents looked at it closer….basically they’re clearing a waiting list, by kicking everyone off the waiting list,” he said.

Nick Dokas worries about the long term effect for his daughter and other children. 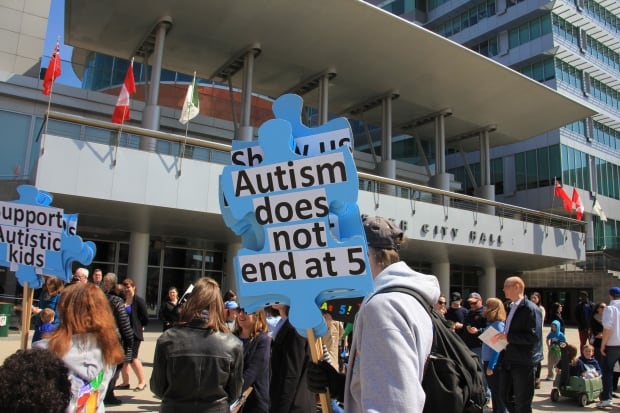 Parents protest cuts to IBI therapy at Kitchener City Hall. Children older than 5 are no no longer eligible for the provincial program after the Ontario government made changes. (Joe Pavia/CBC)

“If you do the economics, if you do the math, by taking away this funding you’ve taken away the chance for these children to have the potential to be who they can be. Down the road they’re going to need other programs, maybe they wouldn’t need that much if that funding is in place now.”

“The government has turned many other decisions around after pressure and we’re hoping that’s exactly what they’ll do with their decision. Realize it was the wrong decision and change their mind,” she said.